The store will not work correctly in the case when cookies are disabled.

The Society of Saint Paul is a religious congregation founded by Blessed James Alberione in 1914 at Alba, Italy. The Society of St Paul is the first branch of the Pauline Family consists of five religious congregations (Society of St Paul, Daughters of St Paul, Pious Disciples of the Divine Master, Sisters of Jesus the Good Shepherd, Sisters of Mary Queen of Apostles), four Institutes (Institute of our Lady of Annunciation, Institute of St Gabriel the Archangel, Institute of the Holy Family, Institute of Jesus the Priest) and the Association of Pauline Cooperators. It was in the night that divided the 19th century from the 20th that Alberione, a young seminarian, received a particular light to do something for the people of the new century. He felt obliged to serve the Church and to work with others in an organized way. That inspiration was vital for the specific mission and spirit of the Pauline Family. At first, he thought of a Catholic organization of writers, technicians, propagandists to whom he would give direction, work and spirit. But towards 1910, in a greater light, he became convinced that these writers, technicians, and propagandists should be men and women religious. This inspiration from the Lord became a concrete realization on 20th August 1914 amidst the destructions and calamities of the First World War. Mons. Giuseppe Re, the Bishop of Alba, erected the Society of St Paul as a Congregation with Diocesan Approval on 3rd December 1927. The Holy See officially approved the Congregation on 27th June 1949.

The Society of St Paul has a specific spirituality based on Jesus Master, Way, Truth and Life (cf. Jn 14:6). Fr. Alberione presents this spirituality as an integral method that helps the integral growth of every Pauline and everyone who lives by this devotion. In the Society of St Paul, Mary is venerated under the title Queen of Apostles. The spirit of the Congregation and of every member comes from St Paul. Fr. Alberione considers St Paul as Patron, Protector, Model, Teacher, Father and Founder of the Congregation. 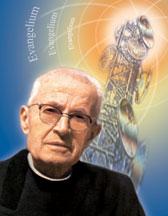 Blessed James Alberione, the Founder of the Society of St Paul and of the Pauline Family, was born on 4th April 1884 at San Lorenzo di Fossano in the Diocese of Fossano in the Cuneo province of northern Italy. He was the fifth child of Michael Alberioneand Teresa Allocco. The child was very weak and hence the parents feared if it would live long. Knowing the responsibility of Catholic parents, they baptized him the following day. The child was given the name James (Giacomo)—the name of one of his paternal uncles.

When James was six years old, he began his school situated about three kilometers from home. In the school, James Alberione did not distinguish himself in anything except for his extraordinary maturity in behaviour. In the very first year, young James expressed his desire to become a priest. Though he was too young for such a decision, the decision seemed to be very firm and serious.

His father and his brothers did not want him to become priest mainly due to the poor economic condition of the family. But his parish priest (Fr. Montersino), knowing the nature and disposition of young James came to the aid. He succeeded to convince the father that it was imprudence to oppose the aspiration of the child. Michael then, proceeded to the seminary of Bra and made the request for the admission of his son. His request was accepted, and thus on 25 October 1896, accompanied by his father, young James entered the seminary of Bra. But it was God’s plan that he had to leave the seminary in 1900. With his parish priest’s assistance, he was then admitted in the seminary of Alba in the same year.

When the nineteenth century ended and the twentieth began, James was sixteen years old. To welcome the new century, Pope Leo XIII had decreed that the night between 1899-1900 and the night between 1900-1901 special midnight Mass and special adoration could be organized in all the chapels where the Blessed Sacrament was habitually preserved. Following this exhortation of the Pope, the night between 1900-1901, the Midnight Mass was celebrated in the seminary of Alba and solemn adoration was organized. In the seminary, the seminarians were free to pray after the Midnight Mass. Young James continued to pray after the Midnight Mass. While praying, he felt obliged to do something for the people of the new century with whom he would be living (cf. AD 15). On many occasions in his life, Fr. James Alberione has idealized those four hours of night adoration. From that moment onwards he tried to understand the society better; his readings were more focused, disciplined and directed towards a precise purpose (to serve the Church); dedicated all of his free time for reading and study. He has ordained a priest with ten companions by Mons. Re, Bishop of Alba, in the Cathedral of Alba on 29th June 1907. After his ordination, he was appointed assistant parish priest of the Church of St Bernard, abbot, Narzole. On 18th October 1908, Bishop Re entrusted him the office of the spiritual director of the Seminary. The decision of the bishop was a surprise for most in the seminary because Fr. Alberione was too young and inexperienced for such a great responsibility.

On 20 October 1913, Fr. Alberione was entrusted with the direction of the diocesan weekly Gazzatta d’Alba.A few months later, on 14 March 1914, he became the proprietor of this weekly. And this would become the key to begin his press apostolate. On 20th August 1914, he founded the typographical school of little workers (later on Society of St Paul)which would use the means of community to spread Christian message.

The work that he started did not enjoy the favour of the Church, but Vatican Council II confirmed his intuitions with the decree of Inter Mirifica on the media of social communication. Fr. Alberione is remembered for the special role he assigned to women. One of the special qualities of Alberione was to decipher the signs of the times and the address them. He felt obliged to use the latest technology at the service of the Gospel. He daringly called "true preaching" the apostolic activities through the means of communication. He said, "we must give the Bible, in whatever form is most convenient" (CISP p. 832). He also said, "Machines, the microphone, the production, projection or broadcasting room are like a pulpit" (CISP p 915). He was not afraid of investing huge capitals for apostolic projects, nor was he ashamed of asking the sisters to go cycling for door-to-door promotion of the good literature. From where did Fr. Alberione find the inner strength to transform his dreams into realty? The answer is prayer, especially the prayer of adoration before the Eucharist.He dedicated more than four hours a day for prayer and exhorted his spiritual children to become, first and foremost, persons of prayer.

Activities of Fr. Alberione slowed down only towards the end of his life. He spent his last days in a life of prayer, rest, short visits of his spiritual sons and daughters. The grave crisis of health took place on 25 November 1971. The following day, Pope Paul VI came to visit him and to impart him paternal blessing. Fr. Alberione died at 18.25 on 26 November 1971 at the age of 87. His body is laid to rest in the sottocripta of the Sanctuary Queen of Apostles, Rome. On 4 May 1996, he was declared Venerable, and he was declared Blessed on 27th April 2003. For the spirituality that he transmitted to the Church and the great contribution that he has made in the field of communication, Pope Paul VI called him "a marvel of our century".

The logo or symbol of the Society of St Paul represents both the Congregation and its apostolic activities, uniting them in a single sign.

It is composed of two elements: a straight line and a curve in a spiral manner. Both elements, combined as much in structure as in colour present a modern dynamic figure of considerable impact and are in a certain sense enigmatic.

In the two lines, one ascending and the other descending, we perceive the salvific movement of the Word of God - and we should not overlook the skillfully stylised allusion to the Sword of St Paul, the double-edge sword (Hebrews 4:12), which expresses the penetrating power of the Word of God.

In the parabolic spiral (helicoid), the discerning eye will capture the "P" for Paul, who is the key to our institutional and apostolic identity.

In the Logo the two dimensions of our mission engage and interact with each other: to proclaim the Word of God among the people of our day and to enable them to discover the Truth hidden in the heart of the events.